Cortina d'Ampezzo is one of Italy's most famous and extensive ski resorts. The town staged the Winter Olympics in the 1950s and is a popular stop on the World Cup skiing circuit for the women's speed disciplines.

It can boast interesting slopes for all levels of skier and, as one of the historic ski resorts in the 'Best of the Alps' group, offers a wide range of accommodation of all styles and standards.

Yet outside Italy and the neighbouring countries, the resort is not particularly well-known. Other ski areas such as the Val Gardena feature in the holiday company brochures, while Cortina remains very much the preserve of the independent skier.

Part of that is down to transport. It is not particularly close to any airports which take charter flights (Innsbruck or Verona) and the journey to resort can be longer than the usual ski package tourist is used to.

And that's a shame, because the stunning scenery of the Dolomites around Cortina d'Ampezzo should put it high up in the list of top European resorts. Add the variety of skiing in three different areas to that and the town deserves to be on the 'to-ski' list of every winter holidaymaker.

The Ampezzo area was settled by Ladin-speaking farmers and belonged for a long time to the German-speaking Tyrol. (Ladin is thought to be a language left over from the days of the Roman control of the area.)

Traditionally it had a large degree of self-government, originally granted by the Holy Roman Emperor back in the Middle Ages, and the village of Cortina (Anpëz in Ladin or Hayden in German) was part of an important trading route between the Italian-speaking south and the German-speaking mountain regions.

Generally, the inhabitants sided with the German-speakers when it came to disputes or wars. During the Napoleonic era, the locals fought as part of the Tyrolean insurrection against the occupation by Bavarian and French troops. For a while, it became part of the Kingdom of Italy, but returned quickly to Austrian control when Napoleon was defeated.

The 19th century was a time when tourism first made its imprint on the valley. It became popular with the rich nobility but also with those who were enthused by the mountain scenery and the activities possible in them.

This led to the building of a number of luxury hotels as well as the founding of the first ski school at the start of the 20th century. Sadly, with the declaration of the First World War, the boom was over, as Cortina became part of the front line in battles between the Austrian and Italian forces.

Many locals lost their lives in the mountains and today the resort is ringed with military cemeteries from those days. Along with the neighbouring communities of the German-speaking South Tyrol, Cortina became part of Italy in 1920 under the conditions of the Treaty of St Germain.

Unlike their neighbours, however, Cortina became part of the mainly Italian-speaking province of Belluno and there have been regular unsuccessful attempts to move the town into the South Tyrol (Alto Adige in Italian).

The Winter Olympics in 1956 (they had been scheduled to host the 1944 Games which were not held because of the Second World War) gave another boost to the tourism of the area and Cortina regained its pre-eminent position as 'Pearl' or 'Queen' of the Dolomites. 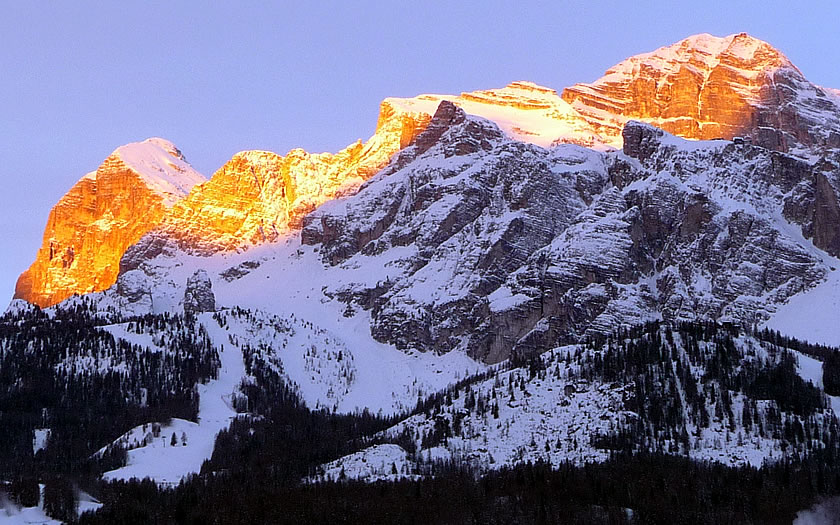 Cortina is surrounded by fabulous mountain scenery which attracts many visitors, but equally makes it harder for them to get to the town.

The easiest access is probably from the south, although plenty of German-speaking visitors from the north make the journey over the Cimabanche Pass from Dobbiaco. There is also access over mountain passes from the Alta Badia and Corvara and to Livinallongo del Col di Lana (where the ski resort of Arabba is better known).

The town itself is a large resort with two cable cars from either end of the centre accessing the main ski areas. The centre has been pedestrianised along the Corso Italia and, along with the luxury hotels, visitors can also see some high-fashion clothing and sports stores.

Traditionally a resort for more wealthy Italians, there has also been a boom in Eastern European tourism since the political changes in Russia and the neighbouring countries.

The stunning mountains and extensive skiing, as well as the history of the area and the attractive town, make Cortina a resort that should be visited by every keen skier at least once.